Dr. May Yuan – Dr. Yuan became involved with the project during the third NSF proposal. Although that attempt was unsuccessful, Dr. Yuan volunteered to begin the process of geo-coding all of the trophic references for the planned database. Shortly thereafter, we were able to obtain  some funding from NOAA and NatureServe to conduct a pilot study on CMECS using references destined for the database.  Although only about 60% of the references were geo-coded and put into CMECS, a significant step had been taken toward realizing the building of the GoMexSI database. She has also been involved with the writing of several proposals toward furthering the database to completion, and papers to inform the scientific community about the need for and importance of the Gulf species interaction database.

THE CENTER FOR SPATIAL ANALYSIS 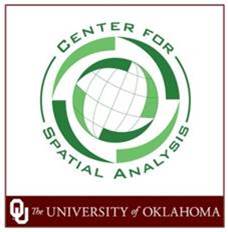 The Center for Spatial Analysis (CSA) at the University of Oklahoma is a multidisciplinary university research center specializing in the study and application of geospatial science and technology. CSA is composed of three working units that focus on research and development, outreach and training, and applications and services. Through efforts in each of these units CSA seeks to advance the geospatial vision of the university and contribute to education, research, and economic development in the State of Oklahoma.

*No longer active with the project.